Meet me at the Potomac Women’s Republican Club Luncheon Today

Meet me at the Potomac Women’s Republican Club Luncheon Today 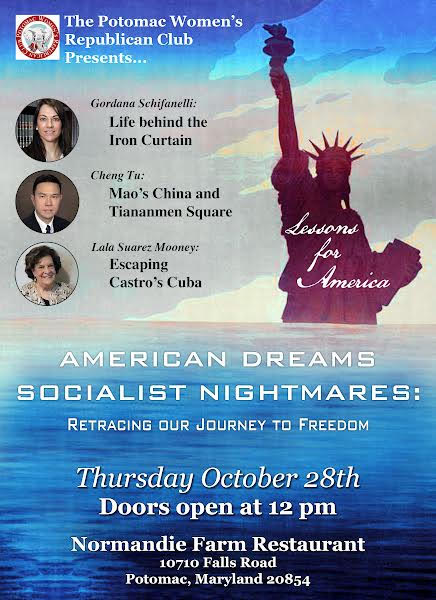 Looking forward to another great lunch with the Potomac Women’s Republican Club.  Event starts at noon but I expect to be there early so look for me if you wish to chat.

Below are the awesome speakers we have today.

Lala Suarez Mooney
Lala Suarez Mooney was born in Cuba to a university professor of engineering.  When Fidel Castro came to power in the late 1950s, Castro quickly jailed many of the elite business families.  It was at the age of 16 that Lala started working against Castro and his socialist regime.  By 19, Lala was swept up with several of her sisters and imprisoned.  In her recently published book Leaving Cuba:  One Family’s Journey to Freedom, Lala tells her story and the story of many other Cuban-Americans.  She details her escape from Cuba and her family’s resettlement in the U.S. as Latino immigrants.  She also tells the story of her son, Alex, who went on to become the head of the Maryland Republican Party and is currently a Republican Congressman from West Virginia.
Cheng Tu

Mr. Cheng Tu came to the U.S. from China in 1995 as a graduate student at the University of Maryland at College Park. He was born in Hangzhou, China at the height of Mao Tse Tung’s Cultural Revolution in the 1960s.  In the late 1980s, Cheng participated in the Tiananmen Square protests as a young college student.  He was fortunate to escape the violence and imprisonment of the government crackdown following Tiananmen, and eventually completed his Masters degrees in Engineering and in Business Administration. Cheng has become a vocal advocate for liberty and rule of law.  Because of his background as a legal immigrant, Cheng has routinely organized community members—particularly those from the Chinese American community–to voice objections to the sanctuary state bills in Annapolis every year since 2017.

Gordana Schifanelli
Gordana Schifanelli is a lawyer married to a former Army special forces officer.  She grew up in a Communist household in Belgrade, Yugoslavia. All of which makes for a powerful opponent in a battle on Maryland’s Eastern Shore between forces of ‘wokeness’ in Queen Anne’s County Public Schools and concerned parents. A smart and skillful lawyer, Gordana took to social media and formed “Kent Island Patriots” and “Maryland Patriots”.  Both pages attracted thousands of hits. They also attracted enemies who used every tool they could to silence and smear her.  First they shut down her personal Facebook page. Then, Facebook and Instagram shut down the “Kent Island Patriots” and “Maryland Eastern Shore Patriots” pages.  They didn’t stop there. They also leveled accusations with the Maryland Bar Association and at the U.S. Naval Academy, where she teaches economics and law twice a week.  But Gordana continues to fight!  She knows what it takes to endure the hardships of totalitarianism.  She lived in Marshall Tito’s communist Yugoslavia and has never stopped fighting for freedom.
Delegate Dan Cox, candidate for the Republican gubernatorial nomination in Maryland, invited Gordana to join him to be his Lt. Gov. running mate. Gordana has been traversing the state speaking with voters about the growing threats of socialism.
Share the Knowledge 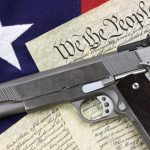 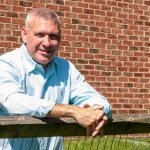 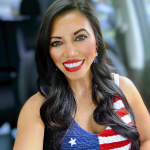